In 1980, K J Bennett suffered a midlife crisis at the age of 23. Flat broke, in a terrible job that paid next to no money, and commuting from Hertfordshire (to where he had moved whilst still in the band) to Camden Town daily, and on the verge of commencing a failed marriage, he realised that a good job was required.

"Of course," says K J Bennett, logically, "I didn’t set out to enter into a failed marriage: as far as I was concerned, it would last forever." It didn’t. The marriage was all but ended in 1986, and a divorce followed soon after. But at the start, determined to make a success of it all. Being an educational failure he first took an IQ test – the result boosted his confidence enough to sit the entry exam for his chosen profession. "I’m no genius, but God knows I’m the next best thing!" the ever modest K J has been heard to state on many occasion.

K J Bennett managed, against all odds, to obtain employment in public service. Yes: on 5 May 1981, he joined the Metropolitan Police Service!

Long hours, a lack of compatibility, and many other things contributed to the breakdown of the marriage. But luck was on his side. Soon after the break-up, K J Bennett met Theresa, the woman to whom he is still happily married. Together they have two children and live in Hertfordshire.

There are many tales he could tell about his role in the police service, but K J Bennett prefers not to. "It’s far too serious to bore people with. I prefer escaping into fantasy worlds, where strange things happen and the impossible is possible. That’s why I write. Maybe one day, when I'm out of it, I'll write about it. But for now its pure escapism for me."

Preferring the challenge of novel writing to short fiction, K J Bennett has written four full length novels and a screenplay, although so far, formal publication has escaped him. His current catalogue, including Pike’s Quest and Rathbone Kydd - sex’n’drugs’n’quantum stuff, may change that.

For K J Bennett, one of the highs of recent years was being reunited with his brother Paul Hennessey. Despite what you, dear reader, may think, Paul is not one of the temporarily misplaced siblings in Cornwall. No, Paul is the son of K J Bennett’s mother, Lillian, and sprang into life in Manchester after Lillian split with the Nomad Dad, Harry. Although K J Bennett had met Paul and brother Terry (who tragically died in 2008) when he was 15 years old, all contact was lost until 2007.

Says K J Bennett: "Paul was a great inspiration for Pike’s Quest. He provided an idea for a story that was posted on a website run by our cousin Babs in Australia. The idea was to have various family members writing chapters in rotation. Paul supplied an introduction and I wrote chapter 1. The novel differs greatly from Paul’s initial suggestion, and is very different to the joint effort by the family, but without that initial seed, Pike may not have been born. He's also helped me in several other ways that I can't detail here." 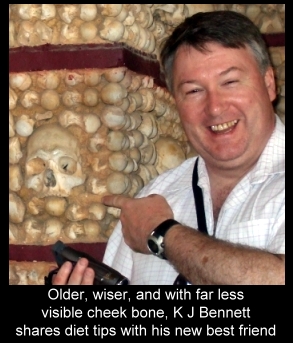 Thirty-plus years after joining the police, and now retired from that profession, K J Bennett looks forward to his future in literature, and has faced up to some demons from the past - in particular, the identity crisis he faced when the electoral boundary changes moved his birth place out of Cheshire and into Greater Manchester. Having finally come to terms with this, K J Bennett can often be seen paying homage to his now Mancunian roots by wandering the streets whilst wearing a green parka coat with a fur rimmed hood, and muttering the words, "Eh-up, our kid."